249: Allen Klein: Finding The Funny Where Others Fear To Look

249: Allen Klein: Finding The Funny Where Others Fear To Look 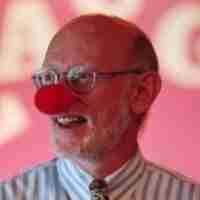 Are you someone that likes a laugh in life but sometimes feels that there is a time and a place for it?

You will suppress it and keep the stoney face that your bosses or environment seem to want as the normal way of being.

Well todays guest is an expert in Gelotology the study of laughter and its effects on the body, and travels the world presenting in a humorous but informative manner that audiences have been raving about for years.

He teaches us to find the funny in situations even if those situations aren’t outwardly the humorous types that we should be laughing at.

And I guess that will make the world a lot nicer to live in I imagine.

Starting his career way back in 1963 designing shows for tv characters such as Captain Kangaroo, he seems a man that from the start has managed to mix work and play, enjoying himself in most situations that he found himself in.

And now with over 20 books written on the subject of laughter such as “The Healing Power of Humor, The Courage to Laugh, and Change Your Life!” does he still feel that their is a lot to be done to get his message out there?

And does he feel that the world is losing the ability to laugh quite in the same way as we would have done in years gone by?

Well lets find out as we bring onto the show to start joining up dots, with Mr Laughter himself, Mr Allen Klein.

How he now looks back at his younger life and realised that as a small child he needed to lighten up and enjoy life more, which is a lesson it took years for him to learn.

How he began the process of finding the innocence in his work when working for Captain Kangaroo and having to start thinking like a child would think on a daily basis.

How when he started public speaking he never really believed that people would pay him to do it, so began speaking often for the salary of a free lunch.

How he found humour and lightness during the period of seeing his wife pass away, and had a very interesting connection with “Playboy” at the time too.

Why he believes totally in the words “You teach what you need to learn the most” and lives by these words everyday of his life.

How To Connect With  Allen Klein