278: David Fisher aka “The Rope Warrior” : Starts Jumping Up Dots

278: David Fisher aka “The Rope Warrior” : Starts Jumping Up Dots 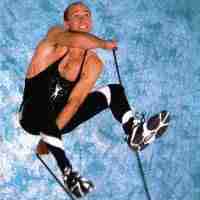 Todays show on Join Up Dots is all about perseverance, talent, struggle, and ultimate success.

A man who has got to the top in his chosen career, and is now a World Guinness Book Of Records Holder too.

Back in 1998, he broke the worlds record for the most revolutions turned with a jump rope while pushing off and landing only on his backside in one minute, yep he did 56 “Rump Jumps”.

Almost one a second.

He has since jumped his way into books, TV shows, countless live shows and, now, a series of energetic music albums and his own instructional books, by teaching kids and adults everywhere to get in shape while having fun, and  The Rope Warrior as he calls himself, shows aspiring jump ropers how they can become rope stunt men and record holders themselves and amaze friends and family with incredible speed and agility.

But this isn’t one of those conversations that is all about having fun, and enjoying yourself, but instead is about hustle, drive commitment to the task.

This is a show about a man driven to be the best that he can possibly be.

So where did this love of ropes and fitness come from?

And how did he realise that he could make a living at this?

Well lets find out as we bring onto the show to start joining up dots, with the one and only David Fisher aka The Rope Warrior.

How he started jumping ropes simply to get into peak fitness for volleyball, but found the passion for the activity to take him to the top.

How he went to a “Showcase” to demonstrate his talents and found himself heading for years of inspiring youngster in schools, much to his surprise.

How he was a shy young man, so would practice his rope tricks to be able to attract the ladies….and who wouldn’t do that I ask you?

“When you realise that you don’t know much, then you actually know a lot”…..which is the part when the real learning starts.

How To Connect With David Fisher