George Dyer: A Man Who Had To Be Told Where His Talent Lay (Opera Podcast)

George Dyer: A Man Who Had To Be Told Where His Talent Lay (Opera Podcast)

Welcome To The Join Up Dots Podcast Interview With George Dyer 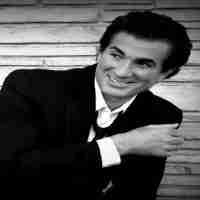 George Dyer is todays guest is one of those guests that might seem easy to pigeonhole when you first look at him.

But once you start digging down, you realise that there is so much more to him than most other artists operating within his creative area.

A native of  Virginia and a devoted family man, he first started making the world sit up and take notice of him when he jumped into the music world in 1996, and made his professional debut to rave reviews with the New York City Opera as Ralph Rackstraw in H.M.S. Pinafore.

And although he certainly has got a set of pipes on him, that can belt out the huge opera numbers that you might be aware of, he unusually allows his voice to demonstrate many other types of music from pop, to Buble, stage musicals, to the Rat Pack.

He believes that the music is only half of what he brings to the audience.

How The Dots Joined Up For George Dyer

Its the whole show that sets him apart from the stand in one spot and belt out the song type of performers.

And now alongside his family, who are also amazing singers, he is taking his talent to the world.

He was named “Best Male Recording Artist” of the year in 2001, 2004, and 2006 by the FCMA and has been released three solo recordings on the Shadow Mountain Label “Wondrous Love”, “Then Sings My Soul” and “A New Song” all of which have received numerous accolades and awards, including several Pearl awards

So what is it about himself, that unlike so many people who would class family as the thing that stops their dreams, made him willing to give it ago?

And has been surprised at how brutal the music industry is, now he is fully established in its world?

Well lets find out as we bring onto the show to start joining up dots, with the one and only George Dyer.

During the episode we discussed such weighty topics with George Dyer such as:

How the definition of “Redneck” came about, and why it is a description which George wears as a badge of honour.

How he left a solid career as a sales rep to go for his dream in his life, even though his Mother in Law didn’t quite have the belief in him that she could have done.

How he never set a timescale to achieve his success, as he knew it would be evident if it was not going to be occurring, so he would know the time was up.

How you need to forget perfection and look at finding the relaxation that will get you as close as possible to your top standard.

You will hear the most perfect Elmer Fudd impression that you are ever likely to hear.

How To Connect With George Dyer

Return To The Top Of George Dyer

If you enjoyed this episode with George Dyer why not check out other inspirational musicians like Elizabeth Tryon,  D Krust and the amazing Nina Soderquist