298: Kim Corbin: A Lady Who Skips Towards A Great Future

298: Kim Corbin: A Lady Who Skips Towards A Great Future 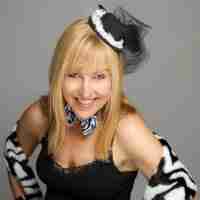 When I started the show, I never considered that I would be having conversations on certain subjects, but todays episode is one of those that has arisen a few times.

It is something that most of us have spent time doing when we were young, but stop doing, because it seems uncool to do it as adults.

But todays guest has taken that logic and turned it on its head, as she is bringing skipping back into the adult world.

Yep, that type of skipping that you might have done as a kid.

Our guest created iSkip in the spring of 1999 when she became so inspired after skipping for the first time as an adult that she decided to invite the rest of the world to join her.

She began organizing regular group skipping events in San Francisco, and in January 2000 quit her corporate job to pursue her dream full time.

She poured her heart and soul into her vision, recruited head skippers in as many as 60 cities, and attempted to start a writing and speaking career.

Unfortunately, that didn’t go so well.

She ultimately skipped herself into financial ruin, and would spend the next several years going through what she calls the “post acute skipping hangover” phase of her journey.  But as soon as she’d think her skipping path had come to an end, a newly inspired Skipper offering a unique contribution to the skipping world would skip onto the scene.

So what was it about skipping that wouldn’t let her go, even when she hit the dark point of perceived failure?

And does she see it more a boost for your mental happiness, or for your physical health.

Well lets find out as we bring onto the show to start joining up dots with the one and only Kim Corbin.

How skipping is the perfect way to break down those mental barriers that can help you overcome anything in life.

How she realised that to create a movement was more about inspiring the passion within her than it was in others.

How she loves to visit Burning Man each year in Nevada, where they build a city from nothing, and then take it down again afterwards.

Why Derek Sivers TedTalk on “How to create a movement” is a great watch and can demonstrate the tipping point of making things happen.

How she now sees the dark points of her life as the true opportunities that life will have in store for her.

How To Connect With Kim Corbin