301: Dainhen Butler: Finding His Dot In The Form Of A Broken Violin

301: Dainhen Butler: Finding His Dot In The Form Of A Broken Violin 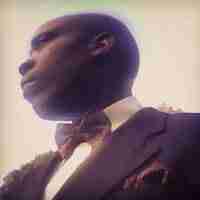 Not too many people can say life was nice and easy for them growing up.

But our guest on Join Up Dots will tell you his life wasn’t extremely hard as a young adult, but it definitely wasn’t easy either.

Surrounding himself with groups of friends that showed him that life was what you made it, he got involved with quick and easy money and a life of crime at a young age.

His desire to wear brand clothing sparked petty thievery such as popping lockers to steal valuables of fellow classmates to begin with, which gradually evolved to armed robberies.

It was when he ordered his affiliates to intrude a store for the second time that was under police surveillance that things came to a head and he was sentenced to serve 10 Years in Lee Arrendale State Prison for armed robbery.

Now the interesting thing about this tale was our guest wasn’t a child who was uninterested, bored and didn’t have an interest for schooling.

He loved being on the debate team, and like many children had a huge passion for playing basketball and shooting the hoops.

Now he has risen from the ashes of his past mistakes and run’s several businesses in the local Georgia community: FunTime Moonwalk Rentals, A&B Ice Cream Trucks, and Tender Care Home Healthcare Service.

He also published a book on his testimony- Shawty: Dainhen Butler and appeared on the well received documentary The Alto Adjustment”, which is the harrowing but inspirational documentary of his life.

So what was life like in prison, and is it likely to inspire the prisoners to change direction, or harden them for a life of more crime?

Well lets find out as we bring onto the show to start joining up dots with the one and only Dainhen Butler.

How he needed a new set of trainers  in his life (or he thought he did) and decided that he needed the money to get them. There was only one way that it was going to occur. The start of the end.

How he recalls the night that he was arrested and is clear that an error of judgement led to his arrest and ultimate incarceration.

How he tells how he had an opportunity to reduce his sentence by testifying against some old colleagues, but knew in his heart that he had led them to that place, so wouldn’t.

How his resume leaving prison was not the key to a fresh start with a clean slate, but instead a key to a world of frustration.

How he sees his big dot in life as the moment he broke his violin at school. A simple action that was a sign of things to come.