360: Monique Walton: Inspiring The World Through The Silverscreen

360: Monique Walton: Inspiring The World Through The Silverscreen 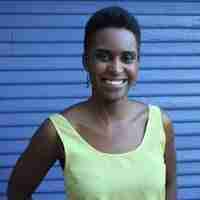 Todays guest was born and raised in Long Island, New York, and became a graduate of Yale University in 2004 where she gained a B.A, with distinction in Latin American Studies.

And according to her profile she then began working straight afterwards as an intern for Chimpanzee Productions, where she assisted in the making of the feature-length documentary “The Twelve Disciples of Nelson Mandela.”

Later after working for Viacom for four years producing educational on-air and web videos for Nickelodeon, she moved on to film school and went after additional education in the area that she had been working.

She decided that she needed more tuition in film production, when so many people would be saying that’s job done…time to be and adult and earn the bucks, this time she studied M.F.A, Film & Media Production.

And this time it seems to have been the lost block to the career that she truly wanted, and could see clearly in front of her.

Both sets of knowledge gained at Yale and Texas came together, and she has since directed and produced numerous short documentary and narrative films focusing on racial identity and belonging.

Her documentary film, Still Black, At Yale, screened at over twenty international film festivals and educational conferences including the Pan African Film Festival and the San Francisco Black Film Festival

Whilst even Forbes recognized her innovative film-based wellness efforts calling her work the “Smartest, Sexiest Workout Videos Ever.”

And believe me I have watched them, and had to have a cold shower afterwards.

So how did she find the thing that she truly wanted in her life, luck, hard work, or a bit of both?

Well lets find out as we bring onto the show to start joining up dots, with the one and only Monique Walton

How so many people often struggle with the concept of black people being placed into the futuristic movies we see.

How she feels that you no longer need to go to film school to get a foot in the business, as hustle and talent can really get you noticed.

Why film is the ultimate failure playground, where you are guaranteed to fail everyday, which you need to get over big-time if you want to succeed.

Why she feels the American Movie industry is killing itself to due to its lack of originality with the huge franchises that fill our screens every year.

How she cant think of anything better in life than being the Producer of Star Wars 10 (even if it means missing out on Iron man 10!)

How To Connect With Monique Walton