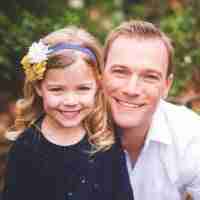 Todays guest joining us on the Join Up Dots free podcast interview is a man who has had a fascinating path to where he is today.

For many people, as young man he would have been considered a success and leading the kind of life that many people would consider the dream.

From the age of 14, you could find him swinging the clubs like a young Tiger Woods, pursuing his passion by playing golf on the PGA tour.

And for the next six years, he followed the tour until in 2009 he decided to put down his clubs and begin starting a family.

And this is a fascinating point in his life, which will lead the conversation today.

After spending so many hours practicing, traveling, practicing, competing, and then giving up, did he consider himself a failure?

Did he embrace the freedom of making that decision, or was he surrounded by people who had a different opinion to how he was leading his life?

Well whatever he felt, he stopped the touring and become a stay at home dad, and after over two years of that very rewarding yet very challenging experience, got into the telecommunication and technology industry doing sales for a small company remotely.

But at his core is this words, his own words “I love to feel inspired.  I love feeling connected to others.  I’m a dreamer who believes bigger and better things are always coming down the road.  I get a lot of inspiration watching and talking to people who are living and walking down an inspired path.  I appreciate it because it’s something I’m constantly seeking for myself.”

So has he learnt the ability through his golf, that even in his own business, if you swing madly and hook one into the trees, then the next shot could be the sweetest one he has ever hit?

And does he look back at the early golfing hustle that took him around the tour, as the perfect grounding for what he is doing now?

Well let’s bring onto the show to start joining up dots, as we discuss the words of Steve Jobs in todays Free podcast, with the one and only Tom O’Stasik

During the show we discussed such weighty topics with Tom such as:

How he is so shocked at how his experience on the golf tour benefits him on the entrepreneurial route that he is taking time and time again.

How he came to the realisation that he wasn’t done with golf, after hearing the comments of “Here’s Tom an Ex-Golfer” and freaking out.

He tells us the story of how he suffered a huge panic attack whilst sitting at work, so left and set off on a 18 hour drive across America.

How he received $40,000 dollars into his bank account after playing a round of golf with a complete stranger.

How To Connect With Tom O’Stasik