Welcome to the Join Up Dots Podcast Interview with Doc Kennedy 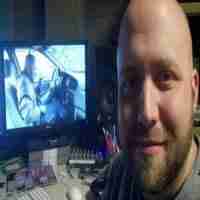 My guest today, on the Join Up Dots free podcast interview is a man who has worked tirelessly to achieve his dream in life

And as we know the dream is always hard to achieve, but sometimes it can be made so much harder by the people that you are surrounding yourself with.

Sometimes your path is hidden from you by the actions and words of others, and no matter how much you try to get going, they will place obstacles in your way.

Which is certainly true with today’s guest, who after a terrible time passing through the education system, stumbled through over 30 jobs, looking for the thing that lights him up.

He knew he wanted to be in entertainment in some way through his whole life, but was always told that it could never happen.

He vividly remembers telling his mom that he wanted to be an actor and being told to “get real.”

He recalls being told by a school councillor that he should go to work at the local mill cause that was all he would ever amount to.

He was directed by not what he thought was possible, but what others were willing to believe.

How The Dots Joined Up For Doc

He needed the support of others, who could help his dreams come true.

The kind of people that would allow the shoots of his dreams to start growing.

And he found those people, and their positive words started showing the path.

As he says “They were telling me I could do something bigger, that I was someone.

They were true friends to me. I learned I could work for myself. They kept asking “what’s your dream?” I thought ‘well maybe I could make a movie if I had $1 million dollars.’

I had no clue how movies were made! I just wanted to make one. – Age 26 I started studying stand-up comedy thinking maybe this was a way to get a movie made.”

So has he made his dream come true, by delivering a movie to the world?

Has he found the path, that he knows is truly his?

Well let’s find out, as we bring onto the show to start joining up dots, with the one and only Mr. Doc Kennedy

During the show we discussed such weighty topics with Doc Kennedy such as:

How his dream remained on a life support system for many, many years, and why he could never turn off the power and let it go.

Why he sees his life as seasons…work time and rest time, and the reason why he is careful to work both into his schedule.

How he took on his first major project without a clue that he could pull it off, but still gave it a go.

Why he would rather be doing what he is doing and scrapping by, than working on a job that he doesn’t want to do.

How he shares his belief that he will one day win an Oscar, and I believe totally that he has this in him to achieve

How To Connect With Doc Kennedy

Return To The Top Of Doc Kennedy