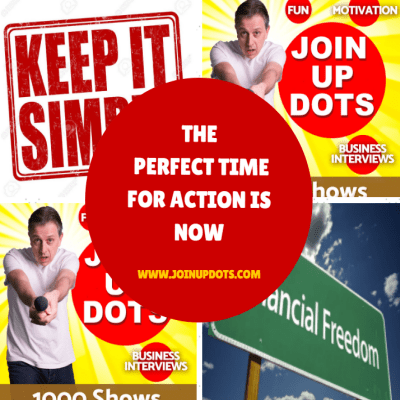 In todays episode of Join Up Dots we focus on a couple of emails from a listener of the show, who has told us off an issue that so many of us struggle with…..too many ideas, the imposter syndrome and waiting for the perfect time.

Lets start with the first email that we received…….

Hi David, I will try and keep this short as I know you limit the time you spend on emails, and I’m sure that you get plenty.

But I wanted to thank you for the content you have been putting out. I have been listening to JUD for around the last six months however some of your recent episodes have been particularly relatable.

When I was younger I always wanted to be my own boss however like you say, I settled and followed the well-trodden path into uni and employment.

I quickly discovered that the promised land of employment in a “good, safe, professional job” is not what it’s made out to be; it’s certainly not been my definition of good, safe or professional.

It particularly hit me when one day whilst commuting into London.

I noticed that the rhythmic clucking of rush-hour footsteps up tube station stairs just sounded too much like people being churned out by a factory press for my liking.

I’m now in employment that suits me much better, and I am very grateful of that considering what I went through before, but I know that I need to really go it alone and dream of doing work which inspires and excites me every day.

Moreover I feel like the time to act is now as I have realised that telling yourself that it’s not the right time is just a lie; now is as good of a time as any and if anything things will only get more difficult the longer you wait.

The difficulty I’m having at the moment is transitioning from paper to practice.

I have no issues forming businesses on paper; developing ideas, researching the idea, creating plans and to an extent even testing ideas.

This however is when I seem to face a huge mental block; much like a deer in a car’s headlights that rather than bouncing along on its way to safety, only stops and stands still.

A mixture of too many ideas and a fear of the unknown is the problem I guess, but something which I am very much fighting to get through at the moment.

Your content is a massive help and a motivator when I’m struggling to move forwards but hopefully these small steps at the moment will be little dots that will join up in the future.

Thanks again, please keep up the excellent work. David

So we went back to him and followed up the conversation and found out that at his core he is struggling with “too many ideas, and waiting for the perfect time”

I have never considered writing and really wouldn’t consider it a strength at all.

I’m dyslexic and the process of writing is something which can be quite time consuming and painful, especially when I know that the structure of what I have written is going to be coming under some scrutiny.

As such it actually means quite a lot that you commented positively on it. I have always tended to compensate for poor writing by speaking… and like a wet fish slapping me in the face, I think I need to take your advice from an episode where you talk about podcasting as a way of engaging and directing sales.

While ideas are great they are now distractions more than anything and that in truth it’s probably me giving myself an excuse not to progress with whatever I was working on and I guess fall back into my comfort zone of researching etc. rather than entering the ‘unknown’.

I will be sure to let you know how I get on with the ploughing on through as well as what happens after.

It’s funny you should mention our old mind-set problem because I can totally relate to that.

I have one friend who I discuss a lot of these things with, mainly because he has similar feelings about his job, but other than that I keep things very much to myself and perhaps that’s a mistake.

Was there something in particular that got you out of that mind-set, a particular turning point when you stepped out from being undercover?

I work in construction so sometimes move around a lot.

During the time I was referring to with the steps comment, I was living in South East London and commuting by train to Watford and Ealing.

I now live in Kent (largely because it’s so much cheaper than London) but split my time between Kent and Essex. If our paths ever cross then I think I owe you a drink.