Les Brown And The Bamboo Tree 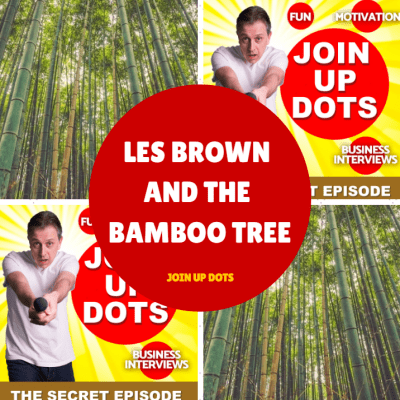 Intro [0:00]
When we’re young, we have an amazing positive outlook about how great life is going to be. But somewhere along the line we forget to dream and end up settling. Join Up Dots features amazing people who refuse to give up and chose to go after their dreams. This is your blueprint for greatness. So here’s your host live from the back of his garden in the UK, David Ralph.

And she starts talking to the table next year.

And it’s all right, when they say sort of have a little chat, and then they disappear.

But sometimes the people next to us kind of go, Oh, you don’t mind if we join you and I joined another good. Okay.

And so I end up talking to a lot of people that I’ve just gone out to speak to my wife, but just going out to have a lovely time. So juicing the old Why buy a bag of chips and a subway? I don’t do any more than that, you know, is she worth it? After 400 years? Of course she is.

But she likes a big subway. If you don’t know why subway is across the world. It’s like a big, ugly looking hot dog is kind of red.

God knows what’s in it probably the worst of humanity.

And it has like little hard bits at the end, which it sounds disgusting.

And you don’t cook them, you just like lay him in boiling water. And I just thought simmer for a million years. But I love a subway, and my wife hates one. And they look they know, I’m not going to say that I actually censored myself here just for a second, it doesn’t happen very often.

I’ve got this image in my head about Labradors. And kind of Let it out, let it out of the bag.

But still, anyway. So we were sitting there the other night, and this family sort of sat next to us and the guy was talking about his job up in the city and stuff.

He’s got his own business. And so the guy said, Oh, what do you do? And I said, How are you? I’m a podcaster of a podcaster?

Oh, okay, um, can I hear you anywhere?

Which is what I get that a lot. And what would be the point of being a podcaster?

But they always say” Can I hear you anywhere?”

No point would there be no point? And I said,

And so he said to me, you know, what I’d like to do is I’m starting my own business.

But I don’t really know what to do. So I sat with him for a little bit. And we were sort of chatting about different things. And he was, it was a pleasant God.

And Benny said to me the thing, which is what this episode is all about what this episode is all about. He said to me, you know, but how long do you think it will take? And I always want to say to these people, how the bloody hell would I know, you know, you can have the best idea in the world and sit there with your hands in your pants watching TV for six months, or you can get out there and you can hustle.

And you can make it work in just a few weeks. And quite a few other guys that I’ve worked with paid on like mental balls. And now you’ve gotten their business up and running in just a few weeks a lot better than I did. But I suppose in the back of the, in the back of my mind in the in the old days, I wasn’t really sure what I was doing. I was just kind of becoming a radio host. And I couldn’t see how to make money.

So it took me quite a long time to actually turn it into something profitable. But these guys have really done it in a short period of time. And I said to him, I said to him, Look, there’s a storey there’s a parable. And he said, Tell me, and I said you really want to know I said, because this isn’t what you want to know. But it’s what you need to know. I said, Have you ever heard about the Chinese bamboo tree? And he said, No, what space and I said, Look, there’s this bamboo tree in in China, and you get them around the world. And it grows 90 feet in five years, which seems quite a lot. It seems brilliant.

And then you might ask your friends, I mean, you want to go off on vacation, but you say I need to water the mud, I need to stay here on water my mud and people will say I’ll just leave it you know, if I leave it. If I leave it.

I’ve got to keep on watering the mud, I’ve got to do it every single day. It won’t make any difference. You could you could just leave a couple of days. I’ll do it. I’ll do it and the neighbour will say are come around and watermark. But you think No you won’t. You barely feed me cat, let alone water the mud, I’ve got to do it myself. So every single day you go out and do it now. In the fifth year, suddenly it starts to sprout.

And within the next six weeks, it grows 90 feet.

It grows 90 feet. Now, the question is, as we will here in a moment, because I’m going to play a speech by Les Brown who talks about the same thing? Is it growing 90 feet in six weeks? Or is it growing 90 feet, five years, everything you do building into your business and building into your lifestyle. A lot of times you don’t see the rewards, and you just sort of doing anything. It’s not going anywhere. It’s not going anywhere.

And you can also with emotional and then us kind of gain clarity. And then it becomes easy becomes easier after that.

But certainly with Join Up Dots, or, you know, many years, it was just watering mud every single day, I would come out here and like water it and then I’d record episodes and I put them out to the world. And I didn’t know whether people were listening or not.

Yeah, the audience speakers were going up, I wasn’t getting any sort of communication from people. But I just kept on doing it. I just kept on doing it. And now it’s shooting up, you know, it’s shooting up like a like a movie stuffed tabloid every single day, every single day. It goes a little bit higher when it has some dips, but I’m happy with the progress you see. And we’re talking about on another episode, but depths of business where you think it’s only got to go one way. And when the dips come up, oh god, it’s going wrong. It’s going well, no, it’s just being what it should be at that period of time.

So let’s listen to Les Brown. And he is a motivational speaker in America. And let’s see what he says about the bamboo tree. And then of course, I’ll see you at the other end. Ill see you in a minute,

Les Brown [0:22]
that is not going to happen as quickly as you want it to happen, a lot of things gonna happen that will catch you off guard. And so therefore you’ve got to deal with and handle it as it comes. And not only that, but that faith and patience drives you into action.

You got to keep moving and keep plugging away. And the Far East have something that’s called the Chinese bamboo tree.

The Chinese bamboo tree takes five years to grow. And when they go through a process of growing it, they have to water and fertilise the ground where it is every day.

Now the question is does it grow 90 feet tall? In five weeks? or five years? The answer is obvious. It grows 90 feet tall in five years, because at any time had that person stop watering and nurturing and idolising that dream that bamboo tree would have died in the ground. And I can see people coming out talking to a god.

They’re watering and fertilising the ground. That’s not showing anything. Hey, what you doing? A long time, man. And the conversation in the neighbourhood is you growing a Chinese bamboo tree? Yeah, that’s right. Well, even rates thousand feet of water.

Because they don’t see instant results. It doesn’t happen quickly.

They stop Oh, no, no, no, no, you gotta keep on watering your dream. When it began to happen, they stopped laughing they said, Look, whoa, look, it’s bad. You know, you can do it look good. You got a job here.

David Ralph [10:16]
So if you ever meet me in a pub or a bar, we stop talking about these things.

What is the question you should never ask? I’ll give you a moment. There you go. didn’t give you too long.

Who knows. But the one thing that you’ve got to do every single day without doubt, is water, that mud, you’ve got to go out and you’ve got to do something because all those little things that seem never to be connected, actually building the foundations of what you want to achieve.

Every single episode of Join Up Dots has got a storey of nothing happening, just floating around just doing this doing that doing a dead end job. But all the experience builds up into something and then you can grow 90 feet in six weeks, you become the bamboo tree.

So don’t get dispirited, don’t build down.

Don’t look at your own business and go it’s not getting anywhere. Because I promise you is as long as you keep on doing it.

Thank you so much for listening. Um, anybody who wants me and wants my help in any regard, drop me a line.

Always happy to to chat with people who really want it and really are committed. And next time I will see you again. I don’t know what episode you’re going to get. But I’ll tell you well, yeah, yeah, I got one. Look after yourselves. And I’ll see you again soon. Cheers. Bye bye.

Return To The Top Of Les Brown And The Bamboo Tree

If you enjoyed this episode why not check out other inspirational chat with Hal Elrod, Derek Rydall and the amazing Rob Scott