Broke BackPacker Will Hatton: Tackles The World On $12

Broke BackPacker Will Hatton: Tackles The World On $12 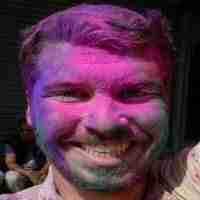 Broke Backpacker Will Hatton is today’s guest joining us on Join Up Dots.

And then when you see them describe themselves as “An amateur adventurer, digital nomad and travel addict. I like to get muddy, naked and painted.” you think yeah wasn’t far wrong.

But what makes this guy fascinating to me, is how very easily he could have been living the normal, humdrum lifestyle of so many of us if he had listened to the words of others.

How easily the broke backpacker might never have existed.

The First Glimmer Of A Travelling Life

As he says in his own words “I first started backpacking when I was eighteen and was instantly hooked by all the inspiring people I met whilst hitching, camping and couch-surfing around Europe. Since then, I have lived in India for a year, worked on bars in Vietnam, herded goats in the Holy Land and conquered the highest navigable pass in the world armed with a poorly drawn map and a packet of ritz crackers. I have survived knife-point robberies in Nepal, guerrilla encounters in Myanmar, motorbike crashes in Vietnam and numerous other mis-adventures.

In 2011, I came back to the UK and settled into a job (much to my parents delight!) working for a travel company;

I hoped I had found my true calling and the broke backpacker was born!

The Dots Joined Up For The Broke Backpacker Will Hatton

Sadly, I spent almost all of my time behind a desk and so I decided to throw it all in, start this blog, and hit the road.

And now with thousands of followers actively consuming the tales of adventure and madness everyday, it seems to me that he has now found his true calling.

So what was it about ritz crackers and the life on the open road that so appealed in the early days?

And by surviving on just $12 dollars a day for over two years, has this been the key to totally immersing yourself into this thing called Planet Earth, that so many of us rarely truly see?

Well lets find out as we bring onto the show to start joining up dots, with the one and only broke backpacker himself, Mr Will Hatton

During the show we discussed such weighty topics with Will Hatton such as:

How he almost had a mental breakdown due to feeling so lost during a period of his life that he literally didn’t know which way to turn, whilst others seemed to know instinctively where they were heading.

How he almost lost his leg when trekking through the South American jungle, and what he learnt from the experience

Why a business built on passion like the broke backpacker, will always find the way to overcome the obstacles that will occur on the way.

How the entrepreneurial spirit that allows him to thrive could not have been as developed without the travel and adventure he has tackled.

Why you can always create a plan b if you need one, but for gods sake don’t waste time trying to make everything safe and perfect if you never get going.

How To Connect With The Broke Backpacker

Return To The Top Of Broke Backpacker