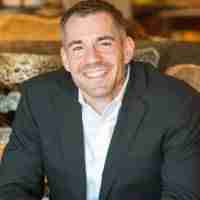 My guest today, on the Steve Jobs inspired Join Up Dots free podcast interview is a man who first appeared on Join Up Dots back on episode 103.

When the show was just a baby compared to what it is today.

Back then we discussed the unusual concept that sales is in fact a honorable profession.

Wait I hear you say…surely I didn’t hear the words Sales and honourable in the same sentence?

But our guest waxed lyrical about why he felt that it was in fact true, and why since 2000 he had  focused his time, passions and energy’s in the world of Insurance Brokerage, coming out the other end hardened by the work that he was performing.

As he said he was bloodied, bruised, kicked in the teeth, chewed-up, and spit-out.

But instead of becoming cynical to this work, he instead developed a passion for helping others learn from his successes, mistakes and backstory.

Focusing on four main areas, Sales training, Attitude, Connections and Loyalty he worked tirelessly to create success in his life.

And now he has managed to take these concepts and turn them into a personal branding encompassing coaching, training, and keynote presentations across America.

He is a man on fire, and certainly from my perspective seems to be in control of what he is doing, where perhaps the last time he was on the show wasn’t quite the case.

So how has he done this and still juggled the issues that comes with being a family man.

And is he where he wants to be in his life, or now is he aiming for bigger and bigger things that he just couldn’t have dreamt possible back in the early days.

Well let’s find out as we bring onto the show to start joining up dots with the one and only Mr Brent Kelly.

During the show we discussed such weighty topics with Brent Kelly such as:

Why there is a comfort level across the world, which has led to so many people to simply follow what everyone else is doing, which is a huge mistake. Follow the crowd and see your prospects diminish massively. Go your own way and get the rewards.

Why Brent realises that their was a confidence issue in his life, which lead him to not fully grasp the value he could bring to the world. When this came together for him then everything became so much easier.

Why the world is more and more looking for the “how long it is going to take” answer, whilst they should actually be looking at “How can I become good?”

Why you shouldn’t be worried about the comparisons that you see online today even though there are so many. Just get your head down and do the work.

How To Connect With Brent Kelly