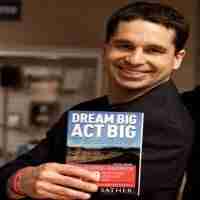 My guest today, on the Steve Jobs inspired Join Up Dots free podcast interview is a man who has been on the show before, but is so inspiring in so many ways its a shock that he has not been on again until now.

He is a professional speaker, and record breaking businessman, who focuses in on Business mastery and also has the “come on guys you can do the impossible you just have to start taking action” vibe nailed down too.

He can help us all get the champion mind-set and build the strength and courage to tackle the “impossible” head on.

But his life didn’t start in such a positive way, as at fourteen years old he was hit head-on by a drunk driver while riding his bicycle.

The neurosurgeon said, “If he survives the night, he will be a vegetable for the rest of his life.”

And certainly the diagnosis looked accurate, as he was in a coma for four days, in casts and rehabilitation for a year, and suffered problematic effects lasting many years.

After the accident, life was a cycle of ups-and-downs until he learned the tools and strategies he teaches today.

He started his professional career as a carpenter and exceled with woodcraft, and then created his first business at age 24, when he entered into the residential contracting and real estate investment business.

But it wasn’t until after a divorce whilst still a young man, did his life really start to find traction and he began to fire sparks across the world.

So from a casual runner, in just nine months he went to running 2,621 miles across America joining the ranks of the most elite ultra-runners in the world.

For 100 consecutive days, he ran a marathon distance, and then gave an inspirational keynote speech to at-risk groups and donated 10,000 of his books “Dream Big Act Big” to the audiences he met.

He ran into New York city waving a huge American flag, surrounded by hundreds of runners, and entered the record books.

And since then he has continued to provide inspiration to everyone that he meets, undertaking many challenges that so many people would look at as daunting and undoable.

So what is it about the world today that sees the challenge too big to even start taking action on?

And was there a moment when he realised that he had the mental strength to tackle anything?

Well let’s find out as we bring onto the show to start joining up dots, with the one and only Croix Sather.

During the show we discussed such weighty topics with Croix Sather such as:

Croix talks about couch surfing his way around the world, and how he has found inspiration by building connection with strangers across the world that he never would have dreamt off.

Why all success is built through years and years of perspiration, hustle and courage to go after your dreams. So many people stop themselves before ever giving themselves a chance to get going.

Why entrepreneurship is such a hard venture to undertake, and how Croix is now more often than not reluctant to tell people to go for it.

Why entrepreneurship is such a hard venture to undertake, and Croix is more often than reluctant to go the same way as others.

How To Connect With Croix Sather