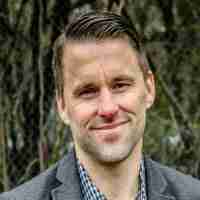 My guest today on the Steve Jobs inspired Join Up Dots podcast interview is a man who has had quite a varied career since starting as a Solutions Specialist for Accenture, before transitioning into a Senior Software Developer a role he fulfilled for over six years.

And it seems to me that he has spent the bulk of his time developing the skills to implement and develop IT systems and platforms, where actually he had a burning desire to develop humans.

And this is the fascinating part of life, and something I talk about often.

That when transitioning to a new life, most of us try to escape for the old one.

But actually most of it isn’t too bad, just some of it doesn’t fulfil us, or make us believe that we are getting what we should.

But we have skills within those old lives that we can and should be taking with us, to make it easier in the future.

And that is what our guest has done today, as since 2014 he has worked tirelessly to help the world live better lives and develop systems that can make us all dream bigger.

But don’t think for a minute that this is a guy who talks the talk, but doesn’t have the experience to say “Hey, I’ve been though some pretty tough times myself, have I told you about overcoming alcohol abuse and the story of my wife’s tragic suicide due to bipolar disorder.”

So how has he taken this career history and turned it into something profitable, enjoyable and valuable to the world?

And does he feel that we are always on the right path, it just sometimes takes awhile to see how the dots are all joining up ?

Well let’s find out as we bring onto the show to start joining up dots, with the one and only Jason MacKenzie.

During the show we discussed such weighty topics with Jason Mackenzie such as:

How he remembers creating a business persona for himself that was pure alpha male,focused on his career and climbing up the ladder…..but he knows now that it was 100% the wrong persona that he wanted to live within.

Why its so important to understand that technology is lowering the bar to such a degree that if you have an idea, no matter how crazy it is then give it a go. If you can’t do it now, it wont be long until you can.

How he remembers hovering over the send button for ten minutes before sending his first post out to the world….but didnt let that fear get hold and crush his dreams.

Why he chooses to believe that if his actions feel good to him and others, then its the right thing to do. The heart always knows.

How To Connect With Jason Mackenzie