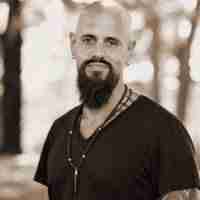 My guest today, on the Steve Jobs inspired Join Up Dots free podcast interview is a man who when you look at his history you think…well where do we start?

He has developed brands across East Africa, the United Kingdom, and the United States.

He liberated 49 Rwanda women from the clutches of sex slavery and trained them for work in various careers across Rwanda that afforded them income, safety and a path to dignity.

He has worked diligently to promote gender, racial and economic equality, developing an ethical fashion label and even wrote a bill on women’s rights in Rwanda that passed through Parliament and had become a law.

Whilst in Kenya, he founded and operated a Creative Agency that has now developed some of Kenya’s most influential brands.

And those arent even the highlights of this remarkable mans life, as he truly believes that we are all extraordinary beings created to thrive through deep relationships, nature, spirituality and creativity.

None of this slog slog slog business, but instead a focus on experiencing a world of abundance, beauty and soul replenish wonder.

His travels include twelve years of exploring from coast to coast in the United States, a decade living and working full time in East Africa and almost two years soaking in the pure life of Costa Rica, and now he resides in Nashville, TN with his wife and three of their four children.

So has he always been a person who is on a mission to experience the wonders of offer, or was it because of the horrors seen in Africa?

And does he see the world living a life over-complicated, in ways that it just doesn’t have to be?

During the show we discussed such weighty topics with Jared Angaza such as:

Why the ability to be vulnerable in ones life is so powerful, and should be used as much as possible when operating in the online world.

Why being an activist was a vocation where Jared struggled to balance the mission with the need to pay the bills, and in todays episode he shares the steps he took to overcome this.

Why work life balance is so important in life, athough Jared works towards loving the work so that its just all life.

Why we should celebrate the belief that the dreamers of the world have instead of trying to make them grow up and accept the status quo.

How he fell into alcoholism and landed on the streets, before finding his calling and building the life that he deserved.

How To Connect With Jared Angaza