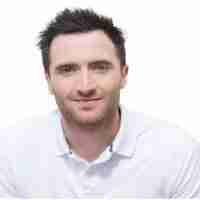 My guest today, on the Steve Jobs inspired Join Up Dots free podcast interview is a man who seems is really hitting his stride and finding his thing in life.

He is on a mission to show us all how we can create a better us by being aware of what we are putting into our bodies, and what actions we are taking on a daily basis.

Now e have seen these fitness guys time and time again, bring to the world some new diet or fad which for many is very hard to maintain after the initial buzz of tacking something new.

But our guest believes that we should do it a different way.

And instead of forcing these principles in to our life and hope that they fit, we should look to tailor our life and go about it a very different way.

As he says ” Back in the day I was in a pretty bad shape. The truth is I never realised how bad I felt until I finally started to feel better and this is the unfortunate reality that so many people don’t even realise they are living in everyday.

It wasn’t until I nearly lost my dad to cancer and saw the pain and suffering he went through during the treatment (including 25 days in ICU, having most of his bowel surgically removed, being placed on life support and kept alive through the use breathing machines on two separate occasions, as well has having a tracheostomy) that it dawned on me how much of an influence his lifestyle choices had on causing the disease. From a diet high in sugar and processed foods, to being a pack-a-day smoker who did no exercise, all combined with having an overwhelmingly stressful career, working 14-hour days, with a minimal amount of sleep, it’s no surprise it took a toll on his health. That’s why I made it my mission to help as many people as possible avoid going through what happened to my dad.”

And now with his Become A Better You Book flying of the shelves at Amazon and his brand new seven day challenge now filling up nicely there is never a better time to have him on the show to join up some dots.

So was there are moment when he realised that physically he was improving at a rate of knots, or was it a gradual process over a period of time?

And what can we all do today to start getting into the mindset of making 2017 our greatest year ever?

Well lets find out as we bring onto the show to start joining up dots with the one and only Mr. Byron Morrison

During the show we discussed such weighty topics with Byron Morrison such as:

How we all have the perception that taking care to eat well is a real hassle and takes too much time but actually the truth is anything but.

Why bulking tasks is such an amazing way to speed things up in your life, whether when building a business or preparing meals for a whole week.

Why it is so important to build trust with people before you ever start to try to sell them anything online.

Byron shares the steps he took to start finding his clients in his business and growing his online income from the very start.


How To Connect With Byron Morrison