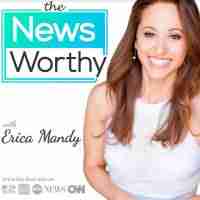 Erica Mandy is my guest on the Steve Jobs inspired Join Up Dots free podcast interview.

She is a lady who started on a career path that the world would say was sexy, and then decided it wasn’t for her.

She now gone in a totally different direction.

Leaving the Indiana University Bloomington, and the University of Missouri-Columbia with degrees in Journalism, our guest spent the last decade — on TV, radio and online — reporting news and sharing stories around the country.

She worked her way up in TV news over the last decade.
She started her career at a TV station in the small town of Columbia, Missouri, where she also worked with an online-only news outlet called Newsy.

How The Dots Joined Up For Erica Mandy

From there, she moved on to Portland, Oregon and later landed a reporter job at CBS Los Angeles, where she reported local and national news in the second largest news market in the U.S.

As a TV news reporter, she was live on the scene during terrorist attacks, wildfires and federal court rulings, to name a few.

She’s interviewed politicians, CEOs, experts, and everyday people doing extraordinary things and it seemed that she was loving every second.

So what was going on internally to make her quit her job as a Los Angeles TV news reporter to launch theNewsWorthy: a daily roundup of politics, tech, business and entertainment

Which she says “Makes it faster, easier and way more fun to get all the news you need to know. Listen on-the-go in less than 10 minutes, Monday through Friday.”

Is this an inspired move into a world that consumes information when and where they want it?

Or has she taken on a world that is already dealing with tsunami of information and now zoning out?

Well lets find out as we bring onto the show to start joining up dots with the one and only Erica Mandy.

During the show we discussed such weighty topics with Erica Mandy such as:

Erica shares how all her hard work and experience over the last decade has left her with the skills to progress to where she wants to be. No experience is ever wasted no matter what you may think at the time.

We discuss that moment in your life when you realise that your business is actually a nuisance and there are things you just have to do away from work.

Erica reveals that she has given herself a year to see what she can make of her new venture, safe in the knowledge that she can always get a job if needed. We dont have to end in despair, but we do need something to give us the courage to move forward with.

Why Donald Trump’s fake news is such big news at the moment, and how the world feels about such reporting.

How To Connect With Erica Mandy

Return To The Top Of Erica Mandy