Rob Greenlee: Podcasting His Way To A Bright Future

Rob Greenlee: Podcasting His Way To A Bright Future 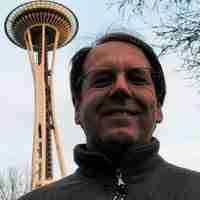 My guest today, on the Steve Jobs inspired Join Up Dots free podcast interview is a man who not only is in the same game as me, but he has his fingers on the pulse of what is hot, what is good, and what in podcasting should be left as an idea and not actually brought out to the worlds ears.

He is the Head of Content at Spreaker, is former EVP/CTO at PodcastOne.com and former Content and Business Manager for Podcasts/TV at Microsoft’s Xbox Live and Zune.

He currently hosts the SpreakerLiveShow.com podcast Wednesdays at 3pm PST and co-hosts NewMediaShow.com/live Saturdays at 9am PST/Noon ES.

Which is of course very impressive, but even more so especially to someone like me is the fact that he is a veteran in the field, starting his  WebTalk World Radio Show in 1999, recognized as the first nationally syndicated radio program in the world to begin podcasting on Sept 15th, 2004. and has been working in the podcasting field since.

Now this is pre-google, pre-iTunes, and pre the world that we now take for granted.

He is a lover of the format of podcasting.

Is a master at his game.

And is focused on raising the standards of content creators across the world.

And if that isn’t something to make you licks your lips and salivate what about this fact!

He is also a Guinness World Record Holder for creating the worlds largest glass of Florida Orange juice.

So what was it that really excited him about stepping behind the microphone and getting his words out to a world, that perhaps was not ready to consume content in such a way?

And is podcasting something that he sees as a great business model, or just a passing fad, waiting to join the Rubik cube, cabbage patch dolls, and the pet pebbles in the craze hall of fame?

During the show we discussed such weighty topics with Rob Greenlee such as:

Rob shares the steps that he took  to create his podcasting career, which led from a love of marketing to putting his words into the worlds ears.

Rob shares why so many podcasts struggle with gaining an audience that will reach out to them and gives tips how to build an engaged audience.

How To Connect With  Rob Greenlee