Struggling Online: I’ve Tried Everything Online And Nothing Works

Struggling Online: I’ve Tried Everything Online And Nothing Works

Subscribe to the podcast, please use the links below: 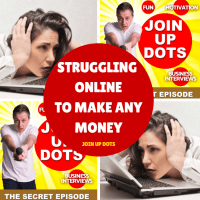 In today’s episode of Join Up Dots we discuss an issue that so many people have in today online world.

They are struggling online to make sales, and get the right customers into their lives.

You see most people it seems, start with a dream and after a very short time change their direction into something else.

However as you will hear this is total rubbish, as if you can make a few dollars come your way there is no reason you can’t make a lot more.

You simply have to learn more about what is working and what isn’t.

If you become obsessed with earning as much as you can then you will have no problem about it all.

So lets start with the email that I received recently from a listener of Join Up Dots, who is struggling online to make a difference for themselves.

I am a long term listener of Join Up Dots podcast and also a long term dream builder.
If I can share a bit about myself, I was born in a small town almost smack in the middle of the United States Of America.
Growing up there wasn’t much to do, and I longed for the time that I could say goodbye to my past and head off into a bright new future.
So when I was 19, I packed my bags and started backpacking through Thailand, Malaysia and then a three year coast to coast adventure through Australia.
I loved it, and would often spend time with people earning money online and supporting themselves without it seemed a care in the world.
That is what i wanted more than anything.
I wanted the ability to live stress free, and simply. Not worrying about mortgages and the restraints of modern living in any shape or form.
So I set off to start earning online and living my dream…I am now 30 and no nearer to that dream.
I have ended back in the town of my childhood and work in a local store to earn a living.
I hate it and feel that the dream is not for me anymore.
Do you have any suggestions as I have tried everything and nothing works, no matter what i do.
Kind regards,
Rosendo

David Ralph [0:01]
Once upon a time, there was a guy with a dream, a dream to teach jobs for himself online and have a kick ass life working when he wanted him where he wanted across the world. Little did he know that dream would lead him into a world of struggle, burnout and debt. Until he found the magic ingredient and knows drunk was became a thing of the past, of course, was bad person. And now My dream is to make things happen to you. Welcome to Join Up Dots.

Intro [0:31]
When we’re young, we have an amazing positive outlook about how great life is going to be but somewhere along the line we forget to dream and end up settling. Join Up Dots features amazing people who refuse to give up and chose to go after their dreams. This is your blueprint for greatness. So here’s your host live from the back of his garden in the UK, David Ralph.

Are you ready to make a full time living online? Check out the following student is already on their way. Thanks to the amazing Join Up Dots business coaching.

Unknown Speaker [17:19]
Bye bye, Simon. I’ve just finished David’s business course and wanted to to share how highly recommend it when I first started. I had a lot of ideas about what I probably thought was going to be good business. David was out to help me through that though, to find that passion. That something that I was passionate about. And from then on, it was just fantastic and just such a breeze and it was so enjoyable. every phase of the course was was so specific. There’s nothing generic about it. And that’s what I love David’s so personable it was, it was about my business and what I wanted to do and, and, and that was, that’s what’s fantastic about it, because it’s not just throw out a whole heap of information. It really is about your business and, and things that are specific about your business. So it’s so customised and and that’s what I loved and I can’t thank David enough and, and as I said, I recommend it highly. If you’re thinking about just do it because you’re not going to regret it at the end of it. And you’re going to come away with the same as what I what I have, and that’s a fantastic business that you can not only be proud of, but but excited about for the future. So once again, thank you very much David and and we’ll see how we go. Thank you.

Unknown Speaker [18:51]
Head over to Join Up dots.com To find out more and register for the free 100% live masterclass. It’s your chance to become the world’s next Success.