subscribe to the podcast, please use the links below: 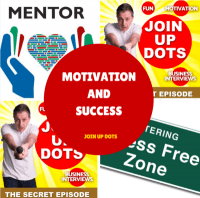 Today’s episode of Join Up Dots brings you two very different stories from the world of business success.

One is from a guy in the United Kingdom who first connected with us at Join Up Dots back in 2015.

His name is Neil C Hughes, who runs the Tech Talk Daily Podcast and just recently has hit over 1,000 episodes.

The second guy is a chap who first connected with us at Join Up Dots about two years ago, and wasn’t in the right position to start building his own dream.

Roll on a couple of years and he has now created a million dollar business in just three weeks.

So where do you sit in regards to building your own dream?

Ready to play the long game, or wanting to hit it out of the park as quickly as you can?

David Ralph [0:01]
Once upon a time, there was a guy with a dream a dream, which is Jobs himself online and have a kick ass life working when he wanted him where he wanted across the world. Little did he know that dream would lead him into a world of struggle, burnout and debt. Until he found the magic ingredient and knows drunk was became a thing of the past, of course, was bad person. And now My dream is to make things happen. BU Welcome to Join Up Dots.

Intro [0:31]
When we’re young, we have an amazing positive outlook about how great life is going to be but somewhere along the line we forget to dream and end up settling. Join Up Dots features amazing people who refuse to give up and chose to go after their dreams. This is your blueprint for greatness. So here’s your host live from the back of his garden in the UK. David Ralph.

David Ralph [0:57]
Yes, hello there. Good morning to you. Good morning to And welcome to Join Up Dots. Yeah, this is the inspirational show. It’s the motivational show and today it’s just me show. No one else is on here. I’m a little bit late today a little bit late getting this podcast out into the air because last night, I did the dad routine I did with that routine. I drove my daughter up into the West End of London to see a boy band called Why don’t we? Or as I like to call them, Who the hell are we? And my wife actually went into the concert with her because I sat in a multi storey car park with Netflix, watching some documentaries until I had to get home. by God. It was the latest morning. It was a Sunday concert. It was a Sunday concert. So why couldn’t they have Danny at two o’clock in the afternoon? You indoors It doesn’t matter what time it is. But these boys these boy band, they came on very, very late. So I’m a little bit late because I woke up this morning and I got I’m tired. But one night kills me. Anyway. How are Wait, how are we? I hope you are all rocking and rolling and enjoying life. I mean, if you’re not enjoying life, why aren’t you making it the life you want? Now in today’s motivation, I’m going to call this podcast motivation. There’s a couple of storeys kind of storeys that have really inspired me recently. And the very first one is from an old makeover of mine. Yes, uh, Mr. Neil see Hughes from the tech talks daily podcast now I’m going to talk to you about Neil now he’s changed recently he’s um, it used to be called a tech writing blogging podcast or something like that. And now he’s rebranded it called the tech talks daily podcast. And he’s also stuck a see Hughes in Neil see huge like Arthur C. Hughes. Do you remember him in the old days? Maybe that’s why he’s done it or Michael J. Fox, he suddenly decided to purchase CN he’s named to make himself more sexy. Well, Neil. He started a podcast Now if you know anything about podcasts, there’s not many that go beyond 100 episodes most up about 25 episodes in now Neil has just hit 1000. Yeah, he’s hit 1000 podcast episodes. And he did a show. And it was lovely to hear where he sort of referenced his starting point and how he didn’t know that he could do it. He had the imposter syndrome on his shoulder, but he plugged in his mighty microphone, started talking. And now he goes around the world spending time with Gary vain Chuck and Manchester United and Real Madrid and he’s had

sitting on your booty not doing anything. Okay? So just do one thing, just do one thing, just send a message to somebody saying, This is my commitment. I’m going to be doing this by the end of the month, send it to me, send me an email to Join Up Dots in gmail.com. And then I will keep you committed. Send it through to me, tell me what you’re going to do. And we will keep in touch with each other and we will drive you forward to the life you want. So big up to Mr. Neil see Hughes and big up. So my mentee and a big up to everybody else who’s doing something but I’m not aware of it. Do something. Make the life you want. And we’ll see you again soon. Cheers. Say bye bye. If you’re inspired to live a life on your own terms, working when you want where you want yc sit Pack and make the decision of how much you want to earn to and it’s all totally doable and nowadays easier than ever, head over to the startup business school at Join Up dots.com and check out the video testimonials from just a few of the students that are now building their dream businesses after going through our coaching sessions and if that excites them book a time to speak to me one to one to make sure you have what it takes to become the next success of our conveyor belt that started business school at Join Up dots.com