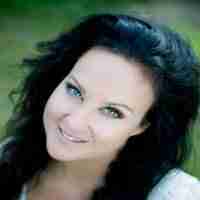 My guest today, on the Steve Jobs inspired Join Up Dots free podcast interview is a lady who has been wowing the theatre world in London’s West End and rocking arenas all over the world for the last few years.

During her 25 years in the industry, she has lived and worked all over the world, first starting as an entertainer at Sunwing performing with dance bands, soul, jazz, pop and cover bands, to finally landing bigtime in rock music.

But it hasnt been instant success and for many years she worked as a backing singer for many of  Sweden’s most popular singers, dreaming of the time that she could push them out of the spotlight and truly show what she could do.

On February 2, 2008, she found the door that could allow her talent to shine big-time when she won the Swedish talent show West End Star onTV.

The prize for winning was the leading role as “Lady of the Lake” in the London West End production of the Monty Python musical Spamalot.

She moved to London to play the lead, which at that time was the biggest role played by a Swedish performer in the West End for a very long time, and made over 500 performances

In July of that year she was back in Sweden leaving the London stage for a while, and performed a song at the popular Swedish television show Allsång på Skansen, where she was approached by the BBC to compete in the UK Eurovision selection event; she declined the offer.

But this is not just the story of a lady working hard and getting a break in the business, as today’s guest is also someone who loves to give back and entertain audiences that perhaps are not her target audience, such as appearing in Afghanistan, Kosovo, Liberia and Mali for the Swedish Armed Forces.

So has this always been a passion, even as a small girl, or did she just find something that she could do very well?

And what has the been the hardest part, the struggle to get there, or to stay there?

Well lets find out as we bring onto the show to start joining up dots with the one and only Nina Soderquist.

During the show we discussed such weighty topics with Nina Soderquist such as:

How she looks back she can clearly see the dots joining up her life, and loves the fact that her future is a walk into the unknown. Scary sometimes but something that she relishes.

Why she wishes that she had got a better manager in the early days of her life, as her journey to success would have been so much shorter.

How she listens to her own songs, and sometimes appreciates them, but struggles to get past the critic in her. She allows the audience to show her what is good or not.

Why she rarely sings away from the stages of the world, and has never ever done karaoke in her life…..shock!!!

How To Connect With Nina Soderquist