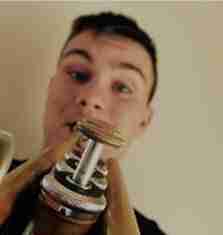 My guest today, on the Steve Jobs inspired Join Up Dots free podcast interview is a man who connected with me on email, and told me such a powerful story that I just had to have him on the show.

And unusually for Join Up Dots, he is just getting going on his entrepreneurial journey, but in a way that you can see he is giving it a go bigtime.

He isn’t sitting behind a story of woe, saying well it will never happen to people like me.

So let’s give you what he told me, and these are in his words

My name is Paul, and I am the owner of Cassus Media LLC in Pennsylvania in the U.S.

I am a U.S. Marine veteran, and a professional musician.

Cassus Media is a business that I officially registered in August 2017; it was free to register here in PA since I’m a veteran, although my service was cut short due to a stupid mistake that I made.

To be honest, I had something tragic happen to me when I was 15 years old by actions made by a trusted music teacher in my life (and my neighborhood).

I held this through my Marine training, and eventually cracked under my own mental pressure, and made a stupid decision.

But this – this fall from grace, something that I do not entirely blame on myself, but by the sexual scarring that occurred and the man who did it to me – did not stop me from my dreams.

Many in my position would be ashamed and become a hermit, and feel as though they are an outcast.

I was given an Other Than Honorable discharge status, something solely determined by the Colonel in command at the time (another Marine that I trained with made the same mistake, but got a higher discharge status called General Under Honorable Conditions).

I let this discharge status define me for a time, and I fell into the woodworks for a while.

I felt that having lost my mother to alcoholism (who I hadn’t seen since I was 6, and while serving in the Marines watched her die when I was 22), not finishing my education, and having been discharged from the U.S. military was the end of me.

Citizens in the U.S. would view me as a failure, and of course this information could harm me if they didn’t know my backstory.

I realized something, though:  I was still alive.  I still had a talent, and dreams I wanted to pursue.

Why should I let my mistakes stop my entrepreneurial dreams?

Surely, I don’t want to work in a call center anymore (which really, really tears me up inside because it’s nothing related to my dreams).

But I also found a way to use this job to my advantage in a number of ways.

And that is the perfect place to start the show.

So is he ready to battle his way through the entrepreneurs minefield with the skills built because of his history, or because of them?

And where does he see the first step towards his dreams? Creating his business, or creating the intention?

During the show we discussed such weighty topics with Paul Cassarly  such as:

How he praises the military for giving him the tools and willingness to keep moving forward in his life, even though his service finished in a way he wouldnt have wanted.

Paul shares his vision of what he wants to achieve in his business, and why he inherently believes you must focus on customer service first and foremost.

How he took him many years to shake off the feeling of failure, by making the decision to accept what has happened and move on to his bright future.

How he now sees that the entrepreneurial spirit has always been in his family from such an early age, and finds inspiration from is family’s hustle and drive.

How To Connect With Paul Cassarly