Young Entrepreneurs To Inspire The World

Young Entrepreneurs To Inspire The World

Welcome to the Join Up Dots Podcast looking at Young Entrepreneurs

Subscribe to the podcast, please use the links below: 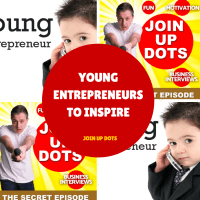 In today’s episode of Join Up Dots we highlight some young entrepreneurs who are really rocking and rolling in their fledgling bushiness’s.

Why are we bringing to the air such young folk, you maybe asking?

Well, we find time and time again that the world is full of people who quite simply say “We haven’t got enough experience to start anything!”

This is of course a complete crock, and experience will only come after the action is taken.

You might have heard of a global dominating podcast called Join Up Dots?

Well before we launched this to the world we didn’t have any experience of running a global hit podcast.

We barely knew how to turn on a microphone and speak live to the world.

You start, you make mistakes, you learn and you gain experience.

So what about these young guys and gals, who are still in childhood and

The following information has been collected from the CNBC website, and you can find the original article here

The Youngest Of The Young Entrepreneurs – Sebastian Martinez

He’s only 7, but he’s already CEO of his own company and a philanthropist.

Sebastian Martinez’s passion for collecting bright and zany socks turned into a business when his mother suggested he design his own. The result was a company called Are You Kidding which Sebastian started at age 5.

In 2014, Sebastian made $15,000 selling his specialty socks with the help of his director of sales and big brother Brandon Martinez.

Since January revenue has continued to grow. “We have been able to already reach the $15,000 that we made last year and are on track to double and hopefully triple our sales this year,” Rachel Martinez, the president of the company and Sebastian’s mother, told CNBC.

Are You Kidding teamed up with organizations like the American Cancer Society and the Live Like Bella Foundation last year to raise more than $3,000 for cancer awareness. In April, the company partnered with The Hue Studio and donated 25 percent of all proceeds from its “Eye See You” sock sales to Discovery Arts, a charitable organization that brings art programs to children with serious illnesses.

What is it like to be a millionaire before you even hit puberty? Just ask 9-year-old Evan from EvanTubeHD.

The face of the highly successful YouTube channel, Evan has been reviewing toys and building Lego sets online since he was 5, and it’s a staggeringly big business.

This pint-sized entrepreneur has three channels on the video platform and more than 2.8 million subscribers. He has amassed more than 1.9 billion views on the platform and is estimated to make $1.3 million a year.

“We’ve already maxed out certain accounts, so I think the college education is pretty much taken care of thank goodness,” Jared, Evan’s father, told NBC News in December. The father has not disclosed their family name.

Nine-year-old entrepreneur Alina Morse had a pretty sweet idea in 2014: create a sugar-free lollipop that tastes good and is good for you.

With a little help from her father and a lot of research, Zollipops was born.

These clean teeth pops are made with sweeteners xylitol, erythritol, stevia and other natural ingredients and help to neutralize acidity in the mouth, so the bacteria that causes tooth decay cannot grow.

Last year, Alina racked up $70,000 in sales and was featured on the kids’ edition of “Shark Tank.” She’s now working to get Zollipops into dentist offices and schools across America.

At 13, Moziah Bridges is well on his way to becoming a fashion mogul.

This dapper CEO launched his bow-tie business, Mo’s Bows at age 9 and catapulted into the spotlight after becoming the youngest entrepreneur to appear on “Shark Tank.”

Bridge’s collection is sold in shops and boutiques in six states and in his online store.

So What Do These Young Entrepreneurs Have In Common?

Amazing stuff from these young entrepreneurs.

So what do they all have in common?

Well for a start they weren’t frightened of failure. Being so young they had nothing to lose as they started their own businesses.

They weren’t scared of looking stupid like so many of us who try entrepreneurship at a later age.

These young entrepreneurs had a dream and made it happen.

Return To The Top Of Young Entrepreneurs

If you enjoyed this episode with some young entrepreneurs, why not check out other inspirational chat with Clayton Morris, Dorie Clark, and the amazing Niall Doherty

David Ralph [0:01]
Once upon a time, there was a guy with a dream a dream, which is Jobs himself online and have a kick ass life working when he wanted him where he wanted across the world. Little did he know that dream would lead him into a world of struggle, burnout and debt. Until he found the magic ingredient and knows drunk was became a thing of the past, of course, was bad person. And now My dream is to make things happen. BU Welcome to Join Up Dots.

Intro [0:31]
When we’re young, we have an amazing positive outlook about how great life is going to be but somewhere along the line we forget to dream and end up settling. Join Up Dots features amazing people who refuse to give up and chose to go after their dreams. This is your blueprint for greatness. So here’s your host live from the back of his garden in the UK. David Ralph.

David Ralph [0:57]
Yes, hello there. Good morning to you. Good morning to you. Good morning to you. Welcome to Join Up Dots. Join Up Dots. I want to start off with saying hello to a lovely lady called Kalia in Australia. Yes. Kalia Kalia. She comes from Australia. It’s good to see you just stand naturally Australia, Australia, Kalia. And she dropped me an email the other day to ask me to help her with her homework. Basically, she signed up for leadership package. And she said, I recently found your podcast and have been bingeing them during my daily commute. I don’t know if I ever get through them all. At the rate, you produce them. You are a sexy powerhouse, you say, get those in and you get to the top of their charts and I will respond to you. Actually, I respond to everyone I do. I try my best to respond to everyone. And so Kalia Kalia Kalia, she’s from Australia. That there you go. You get your name check, you get your name check. Now what I wanted to do today. I realised recently, actually I’ve been a bit slack about saying thank you to people who have left ratings and reviews on Join Up Dots. And I listened to some other podcasts host and they they give name checks and I say thank you and stuff. Now it’s it’s a little bit boring for everybody else, but it’s great for the person who’s left the review. Okay? So I’m just going to do a few of these every now and again. And the first one I want to do because it’s a special word is a guy called James McKay. Now, James McKay, if you’re out there listening, I really want you to listen to this, okay? And I want everybody else to listen. It says given me the competence to start my own business listening to this podcast week in week out, has given me the competence to take the plunge and set up my own business. My only regret. I wish I had done it sooner. The guidance is tips and advice offered by David. It’s been invaluable and I can only attribute the success I’ve had with my business to the valuable wisdom provided in these podcasts. So Mr. James McKay Big Big salute to you and a big round of applause

Until next time, thank you so much for listening to us. Thank you for everybody else. I’m going to give another name check for somebody who should we have? We’re gonna have fantastic energy in as inspiration from Chester 454 or 5333 from the United States, slightly different week after week, but always inspiring energy and an upbeat Listen, until next time, Look after yourselves and I will be here waiting for you. Cheers guys. See ya. Bye bye. If you’re inspired to live a life on your own terms, working when you want where you want yc it sit back and make the decision of how much you want to earn today. Man, it’s all totally doable and nowadays easier than ever, head over to the startup business school at Join Up dots.com and check out the video testimonials from just a few of the students that are now building their dream businesses after going through our coaching sessions and if that excites them book a time to speak to me one to one to make sure you have what it takes to become the next success of our conveyor belt that started business school at Join Up dots.com