Your Reality Is Only What You Want To See

Your Reality Is Only What You Want To See 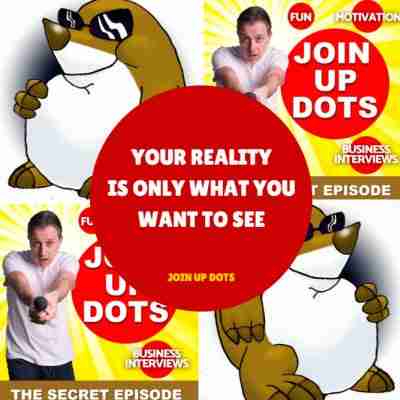 When we’re young, we have an amazing positive outlook about how great life is going to be. But somewhere along the line we forget to dream and end up settling. Join Up Dots features amazing people who refuse to give up and chose to go after their dreams. This is your blueprint for greatness. So here’s your host live from the back of his garden in the UK, David Ralph.

Thank you so much for being here.

Thank you so much for lending me your lovely, firm, sexy bodies for however long I want to keep on talking for.

I never know, I never know literally what I am going to do on these shows.

I listen back to it and It’s funny. The ones where I’m kind of slightly doubting myself are the ones that I get lots of responses back and people go, “Yeah, that really hit the spot.”

One of the ones I’ve had quite a few responses for was the last podcast episode, the solo show, I feel down in the dumps.

This was show when I was I was trying to tell you all that.

Then its time for a change

There’s this guy called Martin, but I know it makes me laugh, because he I’m building a business with him at the moment.

And we’re working through it. And he’s done amazing stuff.

He within six weeks, he’s gone from absolute no clarity at all, to already hiring his first member of staff basically, and is a brilliant success storey.

And I know that Martin is going to go on to great things. Now.

He’s now into that point where beginning it was just a podcast, he was all going around in circles all the time.

And I’ve kind of known him on on and off for about two years now.

And when he suddenly said, David, I want to hire you. And I said, Martin Martin, come to me come to my my firm moves, and I will catch you and show you the future that you deserve. And yeah, we worked on this concept and and we’ve come out with his business.

Now he desperately wants it to be he’s hoping and so he’s coming to work every day.

And he sends me some messages you go up just spoken to the cleaner, and a cleaner so depressed our it brings me down.

And so he’s gone from this feeling of this is my reality to actually now this isn’t my reality, this is something totally different.

But this isn’t where I see myself for the rest of my life.

I see myself in the exciting place my own business where I can live or I can do things as I want.

Now, the podcast episode The other day when I said I feel down in the dumps, just trying to so evidence to you all. But the dream life sometimes doesn’t always become the dream life.

But then once you get it, it becomes kind of normal.

And happiness can stay with you over time happiness becomes normality of a normality becomes depression.

And I was just saying on the show the other day, how I felt depressed for the last few weeks, no reason for it.

But I just felt a bit flat because my dream like the other people look at actually kind of as become a bit boring.

So I need to change things anyway. So that was that was the point of my liberal Martin talk.

And it was um, it was two moles. And you know, a mo is it stays under the ground all the time.

And it comes up with these little mouldy eyes. And it is squints, and it can’t see anything because I it’s supposed to be underground. It’s what moles do. And this mole came up it was like a baby mo and he came up. And because he was like squinting, it was looking at this part of rubbish.

And it looked like a magical castle it was it was beautiful. And the little mole would come up out of the ground and look at this pile of crap and go look at that, that is so beautiful, but so beautiful. Well, he’s moly, died, who was a bit more savvy would come up out of the ground with sunglasses on. And of course, he’d see this big pile of rubbish. And it was just cardboard boxes with some tins on it and, and different things. And he go well, that’s that’s, that’s not lovely.

That’s rubbish. And it’s the humans that are leaving it there to trap us Molly’s, and the little ones still looking at it and go.

Now that’s always stuck with me. Because who’s right? Is it the person with the sunglasses on that goes?

No, that’s a load of rubbish? Or is it the person perceiving what they see as as brilliant and fantastic? Because we create our own reality.

And every single one of us can either look at our lives and go, I’m going to be the mole with the squinty eye is and Oh yes, it’s brilliant.

It’s fantastic. I got a job more often than not, I’ve got the ability to listen to podcasts. I go to my office, I come home, everything is squinty and beautiful.

You know, I’ve never had anyone connect with me that says, David, I’ve got no money.

Well, actually they do. They say to me, you know, I’ll David I’ve got no money at all. No money. Oh, I don’t know what I mean, when I speak to them.

Next they go, Oh, I’m on holiday in Spain at the moment, I think well, you can find a few quid for that, can’t you because their reality was but everything was you know, tight and restricted.

And they haven’t got any money to sort of invest in themselves. But cosplay got money to go up holiday wave and stuff.

Or even if I put it on the credit card, they know that they’re going to be able to pay back that credit card or at least pay the interest back on that. And so they go and do what they want to do. So your life your life, people, when you look around at it, are you saying to yourself every day, this is crap, this is rubbish. Because more often than not, you’re going to get that you’re going to get the crapping the nest and the rubbish.

This is so wonderful. And magical, are we going to be the mo that comes out with a sunglasses, and just looks at it as it is and brings everyone down?

Now, through Join Up Dots. Of course, I try to show you as it is, you know, I’ve been through the journey people I have gone from having no idea what I wanted to do to creating a podcast and for two years having no idea where I wanted to take it to little by little deciding.

But the key point of it all was providing as much value back to you guys as I possibly can. And once you provide the value back to people, you get it back, it’s that increase in value is an increase of your self worth.

It’s that increase of your reality isn’t just the computer screen or the mp3 player or whatever. But you’ve got in your hand. It’s your reality, which is global or expansive or fun. That is when life starts saying Yeah, okay, I can see what you’re saying.

I’m going to give it to you. I’m going to give you that excitement. I met a lady once we went zip coding in St. Lucia in the Caribbean. And when she was out there, I just said to her, oh, what do you do for a living? And she said, Oh, I’m an actress.

And I know are you are you an actress. And we have this little chat. And she pretty much said she wanted to be an actress.

And she didn’t know how to do it. So she started doing it. So she went to some sort of rehearsals and she got involved. And of course once you surround yourself with other actresses you convince, see what they’re doing. So your reality has changed.

You’ve taken your your sunglasses off, moly, and you’ve got on other glasses where you starting to see the reality changing in front of you. And Ben, she would have conversations with people and say, Oh, yeah, we’re doing this on Thursday night.

We’re doing that on Friday night. And when her reality expanded again, until she became an actress on Broadway and the West End of London. So it’s, it’s totally how we perceive where we are. Are we looking at it as this is all we’ve got? And it’s rubbish?

Or is this magical? and wonderful? And how do we make this bigger and bigger and bigger, so that we can get the dream life? It’s it’s a journey you gotta go through. But it’s one of those ones that starts within yourself. And when you change your outer, your outer journey.

Well, thank you so much for listening to this. Hopefully that made sense to you. It made sense to me because I was saying it. But maybe it was a bit esoteric at that time. But I’m certainly think about it and play it back numerous times.

It’s good for downloads. And until I see you again, you can come over to the website, I’m going to be doing some more business training to give you the ideas how to get your business go. It’s funny. I’ve got a survey on the homepage. And it’s something like, do you have what it takes to be an online success? And I would say 95% of people say I would really love my own business, but I don’t know where to start.

And I get hundreds of people doing that. And when I say to them, well I’ll show you where you can start and never see them again.

They just sort of disappear. Dude, I really want it I don’t think they do and that’s going to lead in quite nicely to my next podcast episode which I’ve already planned.

I’ve got it in my head. And it’s about cutting free for people that actually don’t really want it and latest save a do.

Until next time. Thank you so much and I will be waiting for you cheers, Sam.

Outro [11:40]
David doesn’t want you to become a faded version of the brilliant self you are wants to become so he’s put together an amazing guide for you called the eight pieces of advice that every successful entrepreneur practices, including the two that changed his life. Head over to Join Up Dots. com to download this amazing guide for free and we’ll see you tomorrow on joining Join Up Dots